Could Artificial Turf Have Made a Difference in Superbowl 50? 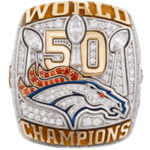 Whether you were cheering on Peyton Manning and the Broncos, or dabbing with Cam Newton and the Panthers, one thing you likely noticed while watching Superbowl 50, was the poor ground conditions. In fact, by the middle of the second quarter, CBS sideline reporter Tracy Wolfson, reported that not only were the Carolina and Denver players changing cleats, but they were complaining about slipping due to the poor turf conditions in Levi Stadium.

To those who have followed the preparations made for Superbowl 50, this may not have come as a surprise, as this is not the first time there have been complaints about the status of the Levi Stadium field. Indeed, when in January new turf was laid in preparation for the Big Game, it was the 6th time since January 2015 that the field had to be re-sodded! Given this information, has anyone stopped to consider how things would have been different had the field been outfitted with a synthetic turf?

Synthetic turf is used 16 of the 31 professional football stadiums, including the Georgia Dome, and is preferred by many players around the country. But other than artificial turf fields always looking great, there are several other reasons synthetic turf is ideal for professional sports fields.

·         Artificial turf does not have the standard growth requirements of natural grass. Unlike a natural turf field, artificial grass is ideal in climates where sufficient growth may be hampered by a lack of rain, resulting in the need for extensive irrigation systems. Yes, water is need to clean the turf, but it is significantly less than the amount needed for Bermuda or Blue grass – common football field coverings.

·         Synthetic turf does not require the extensive use of pesticides or weed removal services.

·         Artificial grass provides optimal shock absorption uniformly across the field. Since every fiber of an artificial turf is created to be a replica of the one next to it, there are no uneven or different textures that will alter the speed of the ball or hinder a player’s ability to find their footing (this would have been a big plus in Superbowl 50!).

·         Artificial turf means the field can be used all year long, so teams can practice whenever they wish, and training sessions are not delayed due to weather, needing to lay new sod, or time spent on cutting.

·         Due to the advancements in the production of synthetic turf, the artificial fibers produce significantly less friction between the playing surface and players’ skin. In fact, one independent study found that there were 40% fewer injuries on artificial turf.

·         Over a 10-year period, natural grass can cost over twice as much to install and maintain compared with artificial turf.

·         Unlike natural grass, you can get a guarantee on beauty and durability of synthetic turf.

Artificial turf for the Levi Stadium, most likely, would not have changed the outcome of Superbowl 50, but it would have improved the playing conditions. Should you be considering what type of ground covering to choose for your local sports field, take some time to talk to one of Challenger’s turf specialists and learn how synthetic turf can help you create the perfect playing location. After all, you don’t want a game to go poorly purely because of the condition of the grass!